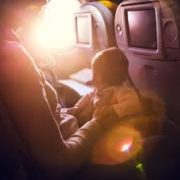 For travelers nowadays, things couldn’t be more stressful. At airports you’re being asked to open your bags, show your ID 70 times, or practically strip down to then be patted down because the scan didn’t like you.

Don’t get me wrong, I support new airport security measures completely and for the most part have encountered pleasant airport employees only trying to move things along. But when you’re about to embark on a five hour flight with an 8 month old child who has just discovered what crawling is, believe me, even the most patient of people can become agitated.

Take for instance TSA checkpoints. Allow me to give a word of advice to moms everywhere. Don’t pack baby oil or petroleum jelly in your travel bag unless you want to send every airport bomb scanner (called Explosive Trace Detectors) into conniptions.

I get it, you’re looking for a bomb maker. Trust me, the only explosion here is the poop bomb in my son’s diaper.

Speaking of taking your child through TSA.

Sure, I expect to have to remove my baby from the stroller. Yes I can take my shoes off. Even my belt. Go through my bag? I will gladly open it. But do we really need to ‘wand’ my baby?

Forgive me for being paranoid, but will I be able to have grandchildren if he is a frequent flyer? Just saying – do you know the long term effects of that wand?

And really how naïve of me to think that once I got through the checkpoint, things would be any smoother. Remember your car seat must be FAA approved. If it isn’t, don’t lug it around the airport because it will need to be checked at the gate.

So there I was, with my son in my lap. Fortunately for me, he’s a flirt and made many friends before he threw his first tantrum.

But of course that too came, just before take off. It’s my fault really. The doctor told me to give him a bottle on the way up and down to keep his ears clear. I took the bottle out. He saw it. He wanted it, badly.

Right about now, standing would soothe him, but then the plane taxis out and you are trapped in middle row 24G. Fortunately, harmonizing with my boy is the baby one row in front. At least we don’t get all the dirty looks.

Even after they stop crying, life doesn’t get much easier. Matthew slept after his bottle, in my arms, until they served dinner. Of course, with my hands full of 23 pounds of squirming baby, I didn’t even entertain the though of “chicken or pasta.” That was not going to happen.

After three hours, I needed a break. Now if I were designing an airplane today, I would create a play area for kids in the back of the plane. A place where moms can give each other a relieved smile and their kids can give everyone else in the plane a break from banging the back of chairs, throwing cups into the aisles, and piercing loud screams.

While my flight was not equipped with a play area, I did find a place of relief. The bathroom. Believe it or not, once given a sterilizing wipe, my son ogled at himself in the mirror for a good twenty minutes. For anyone who was waiting to use the bathroom, I’m sorry, but sometimesfor the good of all, we must appease merely one.

In short, now that summer is here, it’s time for everyone to take those family vacations. Just remember that when you’re flying with a baby, don’t pack the baby oil, take lots of extra bottles of food and be certain to bring an extra dose of creative humor.

If you do this, you’re trip won’t be without many aggravations and mishaps, but perhaps your child will sense your lower level of stress and that in itself can alleviate a whole heck of a lot more.

And to the airports and their staff, yes, we all complain about the longer lines and extra waits, but from my perspective, I thank you for doing your best and making me feel more secure in flying with my munchkin.