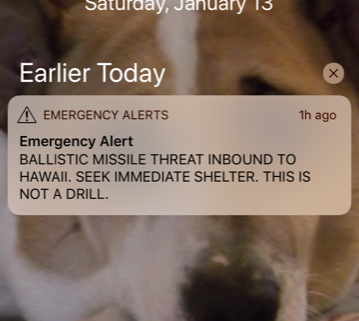 Hawaiian residents are no strangers to mainlanders not quite understanding what life in the islands is like. Sure we’ve got amazing beaches, sunsets, hikes, fishing, food and the list goes on.

Like many of my fellow Hawaii residents, my family was startled with alerts across our phones around 8 am on Saturday. The alert was made it clear that a ballistic missile threat was inbound to Hawaii and that it wasn’t a drill.

What do you do? Keep in mind, I ran a business in California helping families with earthquake preparedness before moving back to the islands a little over a year ago. I feel I’m pretty solid in the prep category.

Yet so many things were out of whack in my plan. Why? Because you can’t script disaster.

I was on my mom’s sofa, where I have been staying recovering from knee surgery and mobile only with crutches. My stockpiles of emergency food and water were at my house, several miles away.

My mom was out picking up breakfast. My grandmother was still sleeping. I waited for the sirens that never sounded while calling my mom to check how far away from home she was.

A quick scan of Facebook and the news failed to give an immediate answer. Frustrated, I kept scanning while instructing my son to walk the dog quickly and fill additional containers with water.

I’m sure our family scenario was very similar to the other families here on the islands. Mom returned as incoming calls from family arrived. Concern and fear was everywhere.

During the chaos, your mind runs through a million things.

How real is this and why would today be the day for North Korea to launch?
Is it a mistake? Where are the sirens.
Do I wake my grandmother and worry her?
Is this the time to simply sit and hug my son, my mom and my grandmother just in case and be thankful that we are together?
It only takes minutes from warning to impact, what’s taking so long?

I looked out the window wondering where the target would be if it was real. My mom’s home is on the West Loch of Pearl Harbor, miles from where my grandmother had survived the infamous Pearl Harbor attack in WWII.

If the base were the target and successfully hit, we would be pretty close to the blast zone and certainly within any fallout.

It simply occurred to me that no matter what preparations we had, there was no way to prepare successfully. It would all boil down to luck of location in the end if it came to that.

More than 30 minutes later, it was announced: false alarm.

A sigh of relief didn’t alleviate the adrenalin running through everyone’s veins. My Facebook feed was evidence of that.

You see the state of Hawaii is not prepared for a nuclear attack. That isn’t me trying to be doomsday. It’s a fact.

Hawaii residents are instructed to shelter-in-place.

What does that even mean?

Stay in your house, office, store or school building. Stay away from windows. Okay, great.

Here’s the reality for those who shelter-in-place at home. Hawaii homes have a lot of windows and sliding glass doors. Many windows are louver-style with no real seal. Older homes aren’t double wall construction and many that are don’t have insulation.

So even if the blast doesn’t destroy your home with you in it, homes aren’t designed to protect you from the fallout.

I can’t think of anyone I know who has a basement. There are no fallout shelters because the state knows there wouldn’t be time for people to get there given the dense population and traffic to any one given location.

Based on data from Hawaii Emergency Management Agency, it is estimated that a North Korean missile’s blast radius is estimated at approximately three miles. If the attack were nuclear, you need to hope you are far enough away from the fallout and have two weeks of supplies to shelter-in-place to hopefully reduce radiation risk.

You have 20 minutes to “take shelter” from the first detection of a missile but it takes 5 to 10 minutes for warnings to get to the public. There are literally minutes to determine your immediate safety and assess where family is.

Hawaii, its residents and visitors are vulnerable to attack. There is no place to go, nowhere to hide.

But in all of this, I recall the day I woke up to the news on September 11, 2001. I feel greater empathy for those I know who survived that day, who lost that day. I feel a stronger connection to my grandmother and those who survived Pearl Harbor.

Ultimately, I feel lucky – at least for today.

Chaos and uncertainty do not feel good. And for me, someone who has helped many plan for disaster, coming to terms with the fact that we are not in control is the biggest reminder of today’s emergency alert.

As the day continues, I see and share the feelings of many of my friends that we won’t live in fear. We hope to see better systems in place with safeguards to prevent unnecessary panic.

But at the end of today, we will still share a beautiful sunset along with the sentiment of #LuckyWeLiveHawaii.

The Reboot: 2017 Review and Lesson Learned

Teaching Our Kids to Deal with Bullies
Scroll to top